Emily Ratajkowski may be famous for her supernatural sex appeal, but her fiercest asset doesn’t fit into a bikini

aybe it wasn’t a wise idea to interview Emily Ratajkowski at Grand Central Market, the crowded emporium of taco stands and omelet spots in downtown Los Angeles. Ratajkowski—actress and model, activist and Instagram queen—has been known to cause the occasional stir, and as I push through the throngs on my way toward our meeting spot, I begin to bemoan the lack of secluded nooks. But when Ratajkowski shows up wearing an LPA hooded sweater, standing alone next to the agreed-upon ramen counter, there’s no outbreak of commotion. All the passersby—including me, at first—walk right past her.

Oops. Already, I have committed the predictable gaffe of anyone encountering Ratajkowski for the first time: I have confused the social-media persona with the actual person, half-expecting her to arrive in a thong. (Her Instagram account, @emrata, is heavy on artfully lit butt close-ups and lingerie-shoot selfies. Number of followers: 10.5 million.)

The next surprise, as we walk around looking for a seat, is that many of
the market vendors already know Ratajkowski—not because of her fabled physique but because she lives in the neighborhood and eats here all the time. Once we’ve spent a few minutes talking, about subjects ranging from Charles Bukowski to her work on behalf of Black Lives Matter, I realize that she’s not someone with whom preconceptions are helpful. And just in case I haven’t figured that out, Ratajkowski tells me so herself. “There are some people who fit into categories very well,” she says. “But then there are a lot who don’t.”

It wasn’t long ago that few seemed interested in seeing beyond Rataj­kowski’s appearance. She made her first major splash by cavorting topless with Robin Thicke and Pharrell Williams in the video for the 2013 mega hit “Blurred Lines.” (To this day, drunken young men approach Ratajkowski in bars and gallantly quote from the controversial song: “You the hottest bitch in this place!”)

But then director David Fincher called her in for a meeting and was impressed enough to cast her as Ben Affleck’s mistress in the thriller Gone Girl. More recently, Ratajkowski has been letting her political flag fly, stumping for Bernie Sanders and penning frank essays about feminism and body image. Meanwhile, the nearly nude selfies and the appearances on men’s magazines’ sexiest-women lists continue apace. She’s playing the smart card and the sexy card with equal confidence, often with a hint of performance-art provocation. “Now,” she’s happy to note, “the people who come up to me are often like, ‘I read your essay, and I loved what you had to say.’”

Director Joe Swanberg, whose latest project is the Netflix series Easy, chose Ratajkowski to star in one episode as a self-absorbed art student and let the actress take the lead in creating her character—everything from her name and hairstyle to her views on feminist art theory. “You just don’t often get people with such a level of comfort with their bodies along with an equal level of engagement and intelligence,” Swanberg says. “And when you do, those people tend to become massively famous or important.”

If that happens, few people in Ratajkowski’s orbit will be surprised. Born in London, where her mother, an English professor, was then teaching under the Fulbright Program, she grew up in a beach town outside San Diego. At age 4 she was already getting used to attention from strangers. “Once, at the grocery store,” she remembers, “some woman told my mom I needed to get head shots. We got into the car and I burst into tears.” (She thought it meant that a doctor would be sticking syringes in her head.) 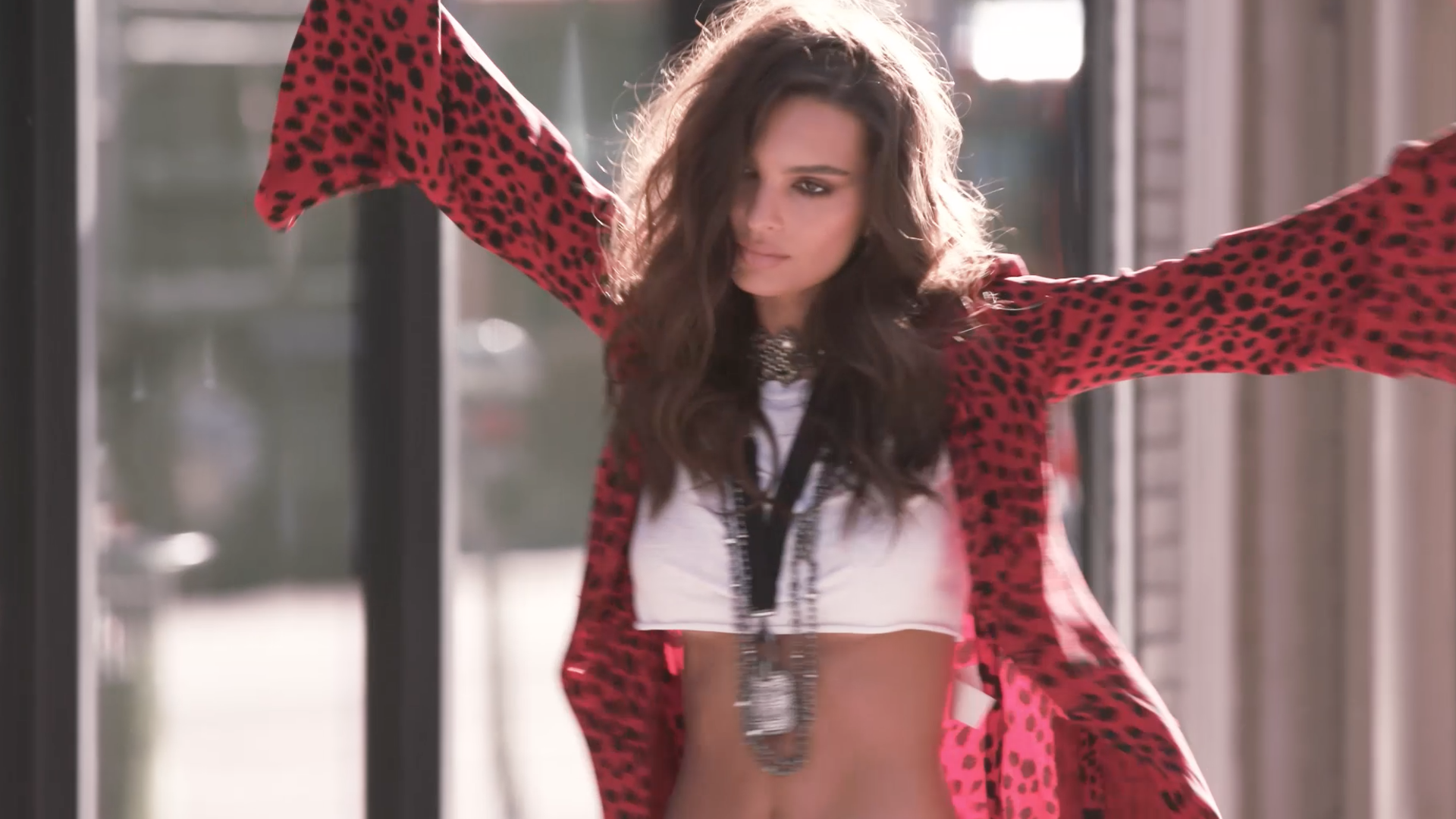 Ratajkowski, an only child, hit puberty early and was seen as a sex object before she really understood what sex was. By 14, she was modeling in L.A., though she remained most comfortable around her bookish parents (her father is a painter and an art teacher). At school she was the quirky alt girl who wore a black cape or a Jimi Hendrix T-shirt she’d made herself; summers were spent with family friends in Ireland or Spain. “Whenever a Spice Girls song came on, everyone knew the words, but it was, like, totally over my head,” she says.

The self-possessed adult who resulted from that adolescence has the kind of confidence that people tend to find supremely alluring, or a little bit threatening, or both. Rataj­kow­ski spent a year at UCLA studying fine art but never adjusted to sharing a dorm with five sorority girls. She moved to New York City in her early 20s and was dismayed to discover how artists had been squeezed out of town by rich kids and finance types, even in Brooklyn. “All I met was trust-fund babies,” she says. “And I was like, ‘Oh, this is no longer the amazing cultural center my parents had told me about.’”

On the career front, Ratajkowski is now navigating the complexities of being a model-actress in a business that still prefers women to be one or the other. After Gone Girl, she was hit with a flood of offers, including a few “cheesy” ones that she admits she was too quick to accept. (She doesn’t name names, but her role in 2015’s We Are Your Friends seems a likely candidate.) “At the time I thought, ‘I’m going to just make a bunch of money and then go back to school,’” Ratajkowski says. “To be honest, I hadn’t figured out that I had a real career on my hands. So I was like, ‘OK, this person wants me to do this? Cool.’ And then all of a sudden I realized that these projects are just not me. That’s when I shifted toward more meaningful things.”

Her feminist perspective took shape early, thanks in part to the influence of her mother, who gave her a copy of Naomi Wolf’s Promiscuities: The Secret Struggle for Womanhood when she was 12. Today Rataj­kowski laments the fact that sexually expressive women are still often seen as attention-seeking. Her perspective, in a nutshell, reflected via her Instagram feed: It’s my body, and I’ll pose if I want to.

“The main criticism that I get is ‘Aren’t you just conforming to a patriarchal standard of beauty?’” she says. “Well, this is just the body I was given. I didn’t do anything to it—it’s just my body. But even if I had altered it, that would be fine too.” Ratajkowski recently found herself arguing with friends over whether Caitlyn Jenner was setting a bad example by being so focused on her outfits and her nails.

“She’s allowed to do that—it’s her choice. If she decides she wants to be a super-femme who’s all about the clothes, great. She can conform to that gender identity all she wants because it’s a personal decision.” Applying that same standard to everyone, Ratajkowski says, “is a way of including all women and also saying that no matter what the circumstances, it’s up to them how they want to be a woman.”

That includes Jenner’s stepdaughter Kim Kardashian West, whom Ratajkowski rallied behind last spring after Piers Morgan publicly trashed her for posting a nude selfie as a 36-year-old mom. “Her body, her career,” Ratajkowski retorted in a tweet, calling Morgan’s comment “sexist bulls—.”

Later the two women ran into each other—at a Justin Bieber concert, no less—and took an Internet-busting shot of themselves together in the bathroom, topless and flipping the bird. Another public flap arose in December, when photographer Jonathan Leder announced the upcoming publication of some nudes that he had shot of Rataj­kowski back in 2012.

“So I used Twitter to reinforce an idea that I’ve believed in forever,” she says, “which is that it’s up to me to choose when and how I want to share my sexuality.” It was no accident that she posted a particularly revealing photo on Instagram a few days later. “Of course, a bunch of the headlines were like, ‘Emily complains about nude photos and then posts her own sexy selfie.’ And I was like, ‘That’s exactly my point! The difference is, it’s my decision to post that.’ ”

“It’s up to me to choose when and how I want to share my sexuality.”

As comfortable as she is on camera, naked or clothed, Rataj­kowski says her modeling gigs in the world of high fashion initially unearthed some insecurities. “I come from such a middle-class background, so it was intimidating to be all of a sudden around really fancy, snobby people,” she says. “I mean, I’ve always loved aesthetics and fashion design, but I didn’t feel super-connected to the grandeur of it all.”

Her next film releases are two indies: Anthony Byrne’s In Darkness, a thriller shot in London, and Robert Siegel’s Cruise, a romance set in ’80s suburbia. Swanberg thinks Rataj­kowski is naturally suited to unique, unusual projects and not just to the big prestige movies that seemingly every actress goes for. In her career as well as in her life, Swanberg says, “Emily knows exactly what she’s doing. As long as she keeps making her own choices, she’s going to be fine.”

Ratajkowski’s Los Angeles home is in the Arts District, east of downtown—a creative hub she calls “fake New York,” which she says she prefers to the real one (as well as to L.A.’s West Side, with its Hollywood conventions and pretensions). “My friends are not in the industry—they’re young artists or knitwear designers or whatever,” she says. Her boyfriend, Jeff Magid, a musician who studied philosophy at Brown University, jokes to her that when he moved out west a few years ago he was eager to chill out in the land of carefree optimists but somehow he ended up with the dark, intense Rataj­kowski—“the one cynical Californian.”

Ratajkowski has been happily involved with Magid for almost three years. She extols his all-around awesomeness to me, but it’s probably no accident that his picture hardly ever turns up on her Instagram. The day after our December interview, I check what @emrata is up to, and there’s a new shot of Rataj­kowski vamping in a Santa hat while plugging the holiday items that she has for sale on the Depop app. The photo had 422,359 likes at last count.